Looking over my work from the last few years I can't believe how little work I've made since 2008. Despite knowing that I went into mostly editing mode for the last 2 years, I'm a little disappointed by how much work I have. The work from the Gulf is good, but I'm just at the start of that. I'm ready to start shooting for the billiboard project.
Posted by ZS at 9:26 PM 0 comments

Thinking about Matt Tune and how much I love that guy.
Posted by ZS at 8:19 PM 0 comments

1. All of the digital files and color proofs were dropped off to the book mavens at the Art Museum, with the exception of 4 plates. It was a Herculean team effort to get it done. Thanks to PPAC and Sarah Stolfa for bringing it home. And thanks to Lightwork's John Mannion for scanning and file prep.

2. I love PPAC. Last week, I was sitting at a computer there for what felt like 20000 hours a day. When I showed up to pick up the files today everyone was working super hard on getting the prints and files together and I fell sound asleep on the sofa. For real, totally sound asleep.

4. Honestly, I can't believe how many people are working on this show. Thanks to everyone. Today, thanks especially to Sam Gainsburg, Grace Ambrose and Rich Bonk.

5. I saw the spectacular Alison Feldish today and I also saw the superb Charday Laverty. I love them both. Charday and I checked out a possible spot for her billboard. Broad and Erie.

6. Now I'm friends with Nora Muchanic on facebook and that's kind of a big deal to me.

7. And I'm sitting next to the greatest person on earth, so all is right.
Posted by ZS at 6:56 PM 0 comments

1. Middle aged? Need a bedtime snack? Try Tums! You can convince yourself they taste as good as Sprees and are a treat. And then if anyone questions you, "My stomach!" or "I need calcium!"

2. I have encouraged Ms. Lynn Bloom to start an anonymous twitter account, because I am the only person who is able to hear the unbelievably hysterical things she says. It's not fair to the rest of the world for her to hide her light under a bushel. It's unlikely I'll convince her of it, but I'll push it.

3. Did you know that Dante of the former "Dante's Den" on Oregon Ave, yes, the same Dante who worked at the Navy Yard in the 80s, that very same Dante coined the acronym DILLIGAF? DILLIGAF standing for "Do I Look Like I Give A Fuck?" Just thought you should all know that.
Posted by ZS at 9:48 PM 0 comments

Do you have any idea how grateful I am to be having a show at the Art Museum? I can not believe what's happening. I'm working my ass off on it and I will be happy to work on it everyday now through March.


Also, I feel the need to play Rhapsody in Blue over and over while working on the book ordering. It's a New Topographics of the 20's Jazz Age.
Posted by ZS at 5:44 PM 0 comments

"...each clump of symbols is a brief, urgent message-describing a situation, a scene. We Tralfamadorians read them all at once, not one after the other. There isn't any particular relationship between all of the messages, except that the author has chosen them carefully, so that, when seen all at once, they produce an image of life that is surprising and deep. There is no beginning, no middle, no end, no suspense, no moral, no causes, no effects. What we love in our books are the depths of many marvelous moments seen all at one time."

From Slaughterhouse Five
by Kurt Vonnegut
Posted by ZS at 10:59 PM 0 comments

These books have now been read several times while working on the billboard project. And they will be read several more times for the project:


The Death and Life of Great American Cities by Jane Jacobs

The Odyssey by Homer

Leaves of Grass by Walt Whitman


These books have been read, or will be read, for the billboard project:


Making of a Modern Classic by David M. Brownlee

First City: Philadelphia and the Forging of Historical Memory (Early American Studies) by Gary B. Nash

Maps of The Imagination: The Writer as Cartographer by Peter Turchi

The Roads That Built America: The Incredible Story of the U.S. Interstate System by Dan McNichol

The Big Roads: The Untold Story of the Engineers, Visionaries, and Trailblazers Who Created the American Superhighways by Earl Swift

Outside Lies Magic by John Stilgoe

Kaddish and Other Poems by Allen Ginsberg

The Education of a Photographer edited by Charles H. Traub, Steven Heller, Adam B. Bell

'Attention, Move! This Is America' by Margot Harry

The Straight Mind by Monique Wittig

Man and His Symbols by Carl Jung

Wicked Philadelphia: Sin in the City of Brotherly Love by Thomas H. Keels

The Authoress of the Odyssey by Samuel Butler

The Possible City: Exercises in Dreaming Philadelphia by Nathaniel Popkin

The Collected Poems of Muriel Rukeyser

The Book of Frank by CAConrad

Play It As It Lays by Joan Didion

The Project Gutenberg EBook of The Anti-Slavery Alphabet, by Anonymous

This eBook is for the use of anyone anywhere at no cost and with
almost no restrictions whatsoever. You may copy it, give it away or
re-use it under the terms of the Project Gutenberg License included
with this eBook or online at http://www.gutenberg.org/files/16081/16081-h/16081-h.htm
Posted by ZS at 8:13 PM 2 comments

Thank You for Everything Clarence! Clarence Clemons, E Street Band Saxophonist, Dies at 69

Art work is a newspaper and accompanying website that consists of writings and images from artists, activists, writers, critics, and others on the topic of working within depressed economies and how that impacts artistic process, compensation and artistic property. The newspaper is distributed for free at sites and from people throughout the United States and Puerto Rico. It is also available by mail order from Half Letter Press for the cost of postage. 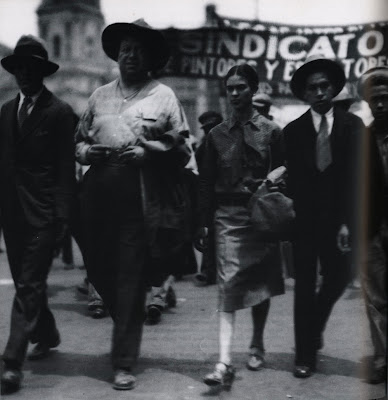 Frida Kahlo and Diego Rivera with a contingent from the Artists' Union in the Annual May Day March in Mexico City, 1929. Archivo Casasola, INAH, Pachuca, Mexico.
Posted by ZS at 10:33 PM 0 comments

email down since last night! Come on Martnet!
Posted by ZS at 11:11 AM 0 comments

I saw Mike Macfeat outside Philly Dream Store. Let me tell you, I love Mike Macfeat. Truly one of Philadelphia's finest.

I saw my man Nick Smuk, who was headed to the river to watch the fire burning in Camden. Nick, we're birds of a feather, my friend.

I saw my friend Stephen Millner, who has a beautiful photo up at Dirty Franks.


Coming home, I saw Rita and Russell who told me they were at a funeral with no air. Seriously folks, can't you help the living with some cold comfort?

A neighbor up the block has pet mice he's keeping in a kiddie pool outside, while he drinks until blackout. This information first came to me via Alison Feldish and then I told Rita and Russell and Rita said he had one running up his arm and had to leave right away she was so grossed out. If mice as pets will keep him from getting so drunk and almost burning down his house by leaving something on the stove and passing out, then I say ok.

Lynn Bloom texted me that during the rain delay at the Phillies, they played Rain Delay.


I taught a class in Madrid in September 2009 and now the blog for that class is active again, with folks sharing photos of the Spanish Uprising. My love to all you guys. Hola. Como Estas?

Allan Sekula asked if I could teach a semester at CalArts, which didn't jibe with my schedule for the PMA show, but I'd love to do it if it's available for a later semester.

Mark Bradford has a show up at the Museum of Contemporary Art in Chicago. I love Mark and I love his work. Check it out.

I'm filled with love and joy. And I'm working my ass off on this PMA show. Back to work.


"To be hopeful in bad times is not just foolishly romantic. It is based on the fact that human history is a history not only of cruelty, but also of compassion, sacrifice, courage, kindness.
What we choose to emphasize in this complex history will determine our lives. If we see only the worst, it destroys our capacity to do something. If we remember those times and places—and there are so many—where people have behaved magnificently, this gives us the energy to act, and at least the possibility of sending this spinning top of a world in a different direction.
And if we do act, in however small a way, we don’t have to wait for some grand utopian future. The future is an infinite succession of presents, and to live now as we think human beings should live, in defiance of all that is bad around us, is itself a marvelous victory."

Thinking about and sending love to all of my Spanish friends. I wish I could be there in person. Solidarity, my friends! Solidaridad, amigos! Enviando amor a todos mis amigos y companeros Espanoles!

Here's photos I made in my high school photography class.

One of a million hardcore shows, 1986

another one of a million hardcore shows, 1986


I found these in an old binder and am saving them for my high school talks.
Posted by ZS at 12:24 PM 10 comments

Looking to speak at and connect with at least 10 public high schools in Philadelphia during the run of my PMA exhibition... if you work at a high school in Philadelphia and are interested in having me come to talk about my work and critical thinking and whatnot, message me here.

Gone are the days of color copying a 4x6 print. Now are the days of files being worked on by several people. Right now the files for the book are being worked on by Sarah Stolfa and John Mannion and I am deciding on "too green" or "more contrast." The book proofs will be coming off one of the PPAC printers this week. This coming book and these prints will be perfect. And the color copies that came before this coming book were also perfect, so it's winning all around.

This work is now about to exist post I-95 and I am thrilled with how it's coming along.

Thanks to all who are working on it.
Posted by ZS at 6:50 PM 0 comments 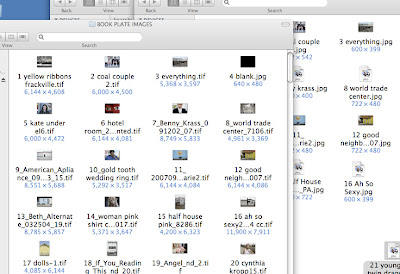