working on the book.

America by Zoe Strauss
Posted by ZS at 10:49 AM 2 comments

Trailer from "They Shoot Horses, Don't They?"
Posted by ZS at 9:10 AM 2 comments

I haven't really any emails since before I-95 and am looking at about a month of past emails. I've given up wanting to know why I have such a hard time responding and am just accepting that I am not super equipped to use this kind of communication; I'm not really suited for this kind of immediacy in writing, and the crushing feeling of being perpetually behind is something I'll have to deal with.

I have a feeling that as we move onward with this kind of instantaneous communication, we'll have to figure out how to balance it in our lives. I know I'm not the only one with a hard time. My lady is very equipped to do several things at once and can handle having a blackberry. Yes, I did say earlier today that I'd like to throw it in the sewer and have a rat eat it, but she's still able to navigate using it while doing other things, unlike I would be. My sister said the other day that it takes me about 30 minutes to write a 3 sentence email and I think she was only exaggerating a little.

A case in point is my spelling, which is atrocious. I just had to look up the word "instantaneous" because I had misspelled it so bad that it didn't come up in spell check. But I'm not about sending out misspellings. It's one of the few places I look for a little decorum.
Posted by ZS at 7:28 PM 3 comments

Everyone knows I love Charday Laverty... she's fully going to make it even if it takes a while. She's going through a rough time right now and I'm thinking about her a lot. I encouraged her to start writing a journal and I was going to sporadically check in on how much she was writing, but she one upped me and started a blog. One thing is for sure, although her personal style of writing is very "myspace" she is a great writer. 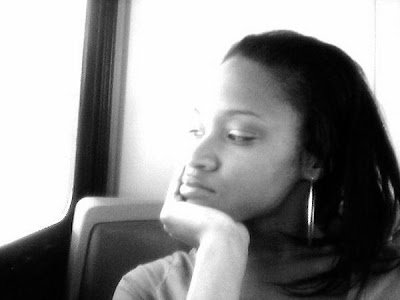 Meme is doing ok, starting CCP and I saw Phylicia yesterday and she's dropped out of school and no job so I'm going to get on her ass about the no job.
Posted by ZS at 8:31 PM 2 comments

Despite gun violence and a slew of other issues, Philadelphia, PA is still the greatest city in the world.
Posted by ZS at 12:50 PM 0 comments

Wherewithal to Wear Whatever

So, my sister-in-law and nieces nominated me for "What Not to Wear" because of my lack of interest in any kind of fashion... and because it would be super fun to have a giant party where everyone was on TV. A party on TV would be super, super fun!

The producers got back to them and told them that I was a candidate for the show and that they should send in photos and they'd move forward with production, but my lady and my sister thought I might not be too into it. "Why?" you ask. Well, I've got some problems with that show.

First, who the hell are these people to tell anyone what they should wear? While a makeover should be fun, this is about humiliating regular women and their sense of personal style and then remaking them into a standard mold of what women "should" look like. And god knows I am not about that. I think that the idea that this show perpetrates is a terrible example for girls. Who cares if someone wants to wear a Christmas themed sweater or too tight pants or purple eyeshadow? Personally, I am often disgusted by men in sandals, but who am I to say that someone I don't know has to cover his foot?

I've had a makeover before, on the Isaac Mizrahi show, and it was awesome. It was about fun and dressing up, not about remaking me into someone that I wasn't.

I'm not against fashion. I'm for it. I'm for style and for presenting yourself as you want to... for some people that's Prada, for others it's Village Thrift. For my lady it's Ben Sherman and Adidas. For me it's a uniform of a green tshirt and jeans. I'm for suggestions about clothing, but not about fashion presented as a mandate.


Coming out of the discussion of why I didn't want to be on "What Not to Wear," I decided to create "The Wherewithal to Wear Whatever" project. This is a full blown celebration of personal style. Get ready, friends.

Wherewithal to Wear Whatever Project


Using a 25 dollar budget, buy an outfit, supplement or accessorize a favorite outfit, or blow the 25 bucks on something else and wear stuff you already have. You can use the 25 dollars on anything; a whole outfit, sequins for something, flour sacks, a hat, whatever. Submit a photo of yourself wearing the outfit and your answers to the questions below. All submissions will be posted on the Wherewithal to Wear Whatever website. Send all submissions to
wherewithaltowearwhatever@yahoo.com

Please send a approximate 4"x5" image of yourself in the outfit and the answers to these questions.


What did you spend the 25 dollars on?

Where would you wear this outfit?

Why do you love this outfit?


Posting on this site will begin in mid June. Feel free to send in your submissions as soon as possible. Every entry we get will be posted. Stone butch? OK. Like to wear shirts with a giant profile of a wolf? OK. Burka? OK. Issey Miyake? OK. Made it yourself? OK. Bought it under the El? OK.
OK.
Posted by ZS at 7:00 PM 7 comments 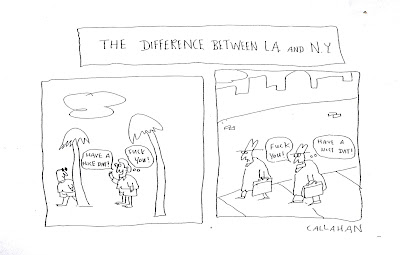 by John Callahan
Posted by ZS at 5:39 PM 2 comments

You know who I'm a big fan of? James Bidgood. While there's much to think about in terms of "queerness" in his photos, I have to say that the color and use of light in his photos is so sublime that I take great pleasure in just looking at them. My "must over-think this image," which is so often in high gear, melts away with the use of colored lighting. 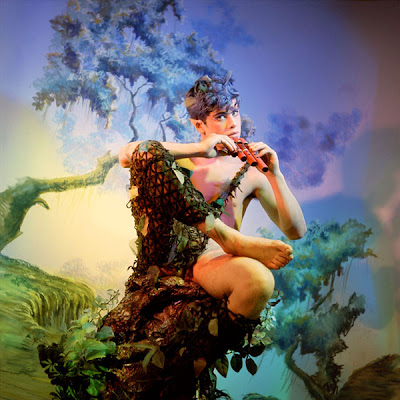 Click Here to Find Out About the South Philly Biennial

These guys were a celebration of pansexuality in Pottsville, PA. It was pretty amazing. Justyn is bisexual and Dorthia is gay and both have fairly fluid sexual identities. It was a pretty intense conversation we had considering that I'd only met them yesterday and had spent like 20 minutes with them, after stopping to make a photo of Dorthia on her front steps.

The nude shots and the more sexually suggestive photos from yesterday are interesting, particularly because these people are strangers... but I'm really feeling the top 2 photos. I'm planning to go back for another photo shoot. Thanks, friends.
Posted by ZS at 10:41 AM 0 comments

Girls! Check out the Girl Project!

Remember the biggest scare of the last century? No, not the "war of the worlds" radio broadcast. No, not the cold war or the hot WWI and WWII. The metric scare!

I'm going to guess it was 1979 when it happened. "Metrics" suddenly appeared in the school curriculum out of thin air because we were all going to start using metrics within the next few months. Oh my GOD, how were we going to measure? It was terrifying. It was like "you have to learn Esperanto today because starting next week that's the only language that will be spoken IN THE WORLD."

I'm just bringing this up because I'm so happy about the online English System to Metric conversion sites. 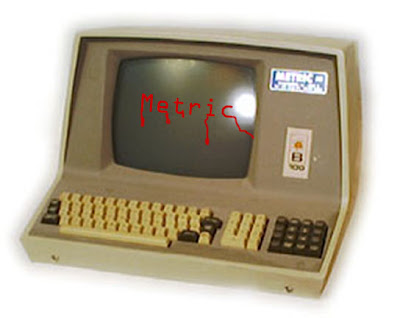 OK, I have written before about how dissapointed I am in the Philadelphia Mural Arts Program... here and here. But I will never be done talking about it because I want Philadelphia to have quality art, not half-assed art.


I've painted murals before I-95 and I am not a painter by any stretch. Here's one I painted a while ago. It's been down for more than 10 years, but I wish it would go back up.

And here's an rough outline for a mural that I wish would go up.

And here's an rough outline for one that should go up.

I am a big proponent of murals that explain our household utilities. 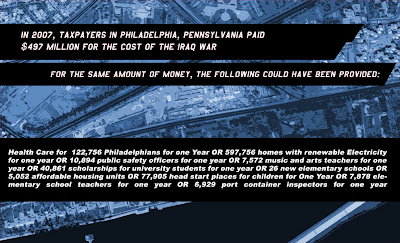 After all, we are at war.

What about the idea of having murals that inform, as opposed to interepretations of what's considered "inspirational"? How about a mural of an accurate world map? 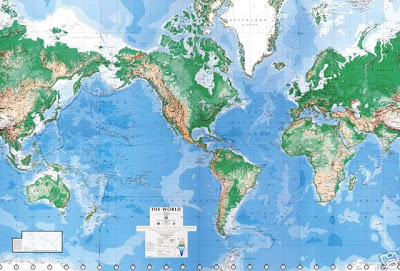 
This mural at Broad and Spring Garden is fucking ridiculous. This is a response to youth violence in Philadelphia? I seriously hate this piece so much I can barely look at it. Mural Arts, I BEG you, please stop producing work like this. 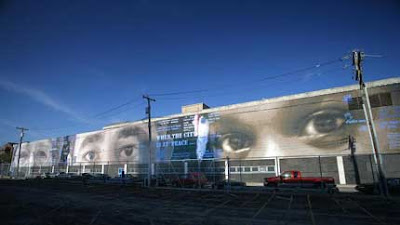 There are some murals that I think are fine and I absolutely don't have to love, or even like, the majority of them. But I can't believe that so many of them look like the one above.

Now, can't we get some of these people to produce murals here?


Steve Powers is an amazing muralist 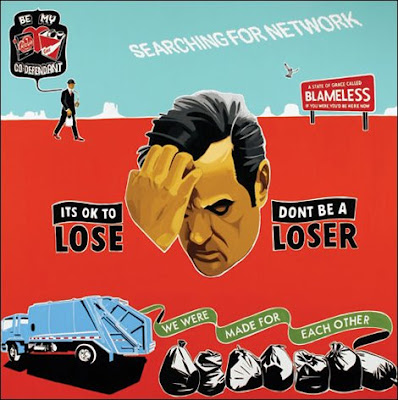 Image by Steve Powers. His new work in Ireland is killing me. He's from Philadelphia, so why don't we have several THOUSAND of his murals?

What about a mural by Kehinde Wiley? 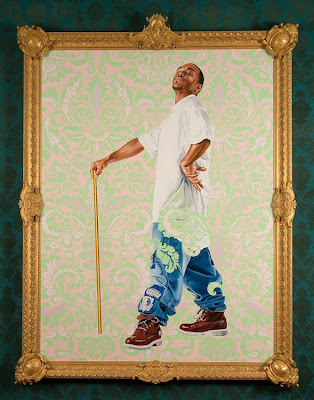 That mural of the kid reading a Jiffy Lube text book on South Philly High isn't cutting it.

or something by Angela Dufresne? 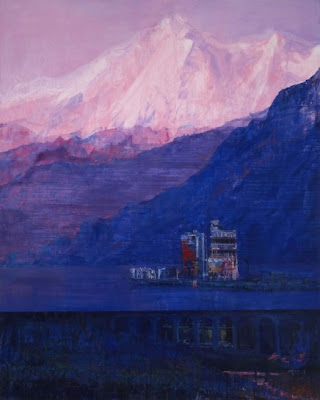 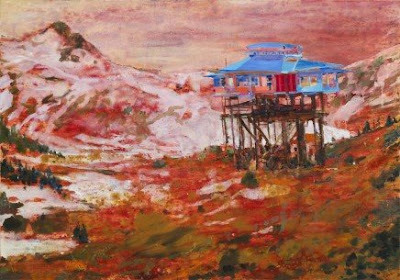 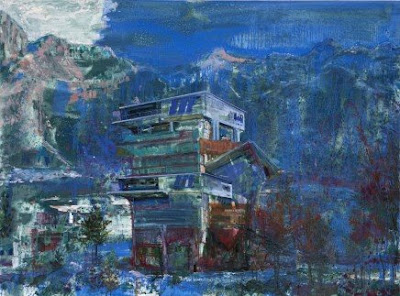 Look at how great these paintings by Angela Dufresne are! Why can't we have these instead of the majority of crap murals we have?

or something by Mark Bradford? 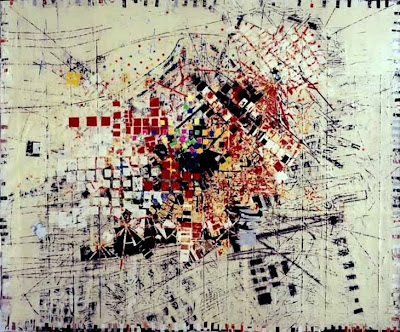 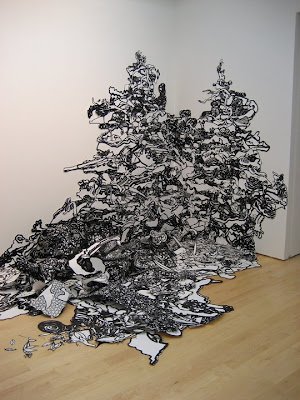 or one of the hundreds of tremendous Philadelphia artists who would produce work that's more challenging and responsive than what we have going on right now? You know, mural wise.

The above artists produce beautiful and evocative work; and you'll note that none produce images of a "kid graduating" run through a photoshop filter.


Also, David Kessler once told me that he'd paint a mural of a giant rat battling a giant robot rat and I would love to see that.

Look at these 2 paintings that Philadelphia Museum of Art has inside the main building.... 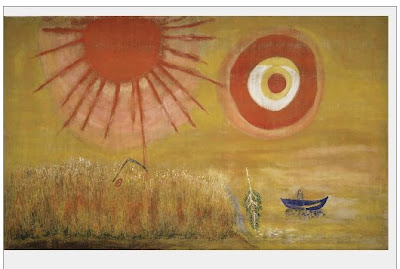 Marc Chagall, A Wheatfield on a Summer's Afternoon 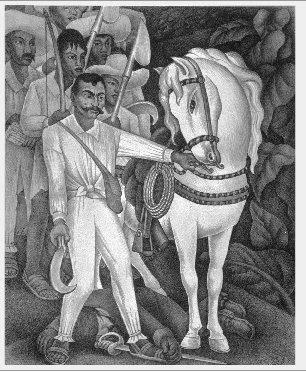 Why can't we demand the same kind of quality art for the public view? Come on!
Posted by ZS at 1:52 PM 2 comments 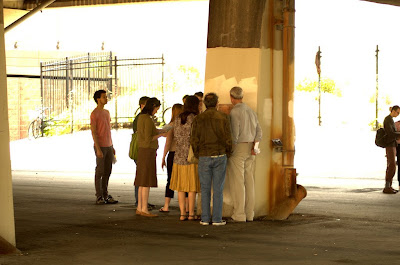