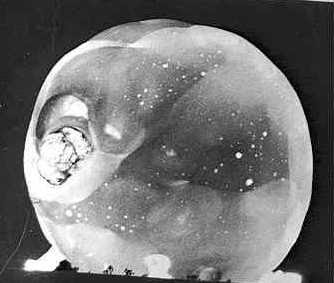 "Developed by Dr. Harold Edgerton in the 1940s, the Rapatronic photographic technique allowed very early times in a nuclear explosion's fireball growth to be recorded on film. The exposures were often as short as 10 nanoseconds, and each Rapatronic camera would take exactly one photograph.

Edgerton built a special lens 10 feet long for this camera which was set up in a bunker 7 miles from the source of the blast which was triggered- the bomb placed atop a steel gantry anchored to the desert floor by guide wires. The exposures are at 1/100,000,000ths of a second....In another millionth of a second, a planet of fire exists,
silhouetting and dwarfing the Joshua Trees." 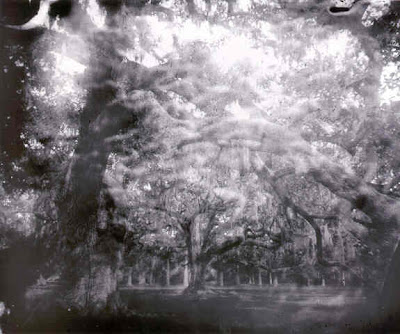 
"Outfitting her large-format 8 x 10 camera with undersized and often damaged lenses, Sally Mann’s contemporary landscape photographs admit the light leaks and imperfections of the photographic process. Occasionally, a distortion becomes the central element in a work."
Posted by ZS at 12:56 PM

Edgerton is the name of my street. Weird.