1. Homer Jackson (an amazing artist, a Philadelphian and an overall great guy) once told me about this brilliant idea that he had...why not put a combined "Rocky" and "History of Philadelphia Boxing" museum on the Parkway. I think that's an amazing idea and is appropriate for commemorating the importance of Rocky to Philadelphia culture. It would be a great asset to the city.


2. Prior to the Rocky statue movin' on up to the parkway again, the Rocky statue debate had unfortunately fallen into a "culture" vs. "real people" battle, which was ridiculous. Why were these people saying that the Rocky statue had to return? And, seriously, the idea that "Rocky" is a blue collar hero? Rocky is a fictional character and the sculpture blows. Sylvester Stalone isn't from Philadelphia, yeah, the writer and actor isn't from here...what the fuck!

The scene where he ran up the steps was amazing...but we need a movie prop to commemorate it? No, we dont. Christ! How literal do we need to be?


I am a huge Rocky fan. Dudes, my entrance song at the Whitney thing was "Eye of the Tiger!"
But come on!

Actually, I am hoping that they put a statue of Mark Wahlberg, who plays Vince Papale in Invincible, at the top of the steps. 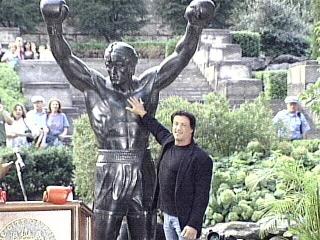