This Is America opening next week 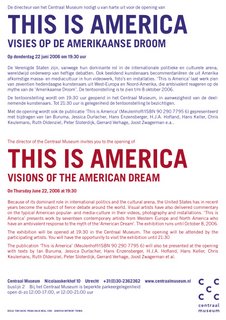 This is America
Visions of the American dream
Centraal Museum Utrecht, June 24 - October 8, 2006

In ‘This is America’ seventeen contemporary artists from Western Europe and North America outline their personal vision of the United States as the dominant force in mass culture and the media. They are reacting to the image of the ‘American Dream’ increasingly perfected during the twentieth century via the American mass media. Since 9/11 and the war in Iraq that dream has been shattered. In this exhibition, the participating artists show what America means to them now. The exhibition runs from June 24 through October 7 in the Centraal Museum in Utrecht.

Capitalism
Post-1945 relations between North America and Western Europe have become increasingly complex. Following the example of the United States, also in Europe economic forces exerted an ever greater influence, particularly in popular culture, the sciences and politics. The influence of capitalism is recognized worldwide as one of the determining factors in the globalization process. But, particularly in recent years, the US presence on the world stage has prompted a storm of criticism. The country’s dominant role in the international political and cultural arena has occasioned fierce debate.

Cultural critique
This is also evident in the visual arts, where contemporary artists comment on the typically American media culture that we know from commercials, soaps, music clips, television shows and films. These artists formulate a personal and often highly critical view of the clichés and banalities of today’s consumer culture shaped along American lines. In doing so they refer to the stereotypical image of ‘America’ nestled deep within our collective consciousness. Their ambivalent attitudes to popular culture and the media are expressed in the tempting aesthetics of lifestyle and branding, which they take over themselves or refer to in their work. They analyze the visual culture of late capitalism and make use of its conventions, by isolating and reflecting on such conventions critically and incorporating them into new montages or absurdist parodies. These artists do not believe in originality; rather they copy with verve. They make eager use of the artistic principles of détournement (freely adapted from Guy Debord). Their image archive is to be found on the internet. They are a thoroughly post-modern generation of media-oriented artists, all born around 1970 and trained in the Nineties. Their work does not add up to a coherent cultural critique, rather each opts in his or her own way for a position that enables critical consideration.

American photo-realism
Around 1970 the American photo-realists opted to render typically American subjects: showrooms, neon advertising, pinball machines, cars, cruise liners and all kinds of artifacts of modern life. In doing so they entice us with beautifully polished images of a material reality that is perfectly designed. ‘This is America’ will show a selection of works by the American photo-realists taken from Dutch museum collections. In this way a comparison can be made between the materialist triumphalism of these paintings from the Sixties and Seventies and the sometimes vicious cultural criticism expressed by contemporary artists in their work.

i'm stopping my blog for a while. i may start a new one

i'll be in touch!

good luck with the show...

Hiya- I'm a philly girl living in Utrecht, the Netherlands for 4 years. Looking forward to checking the show out (Centraal museum is very cool) Have you or are you coming to NL?
Take care