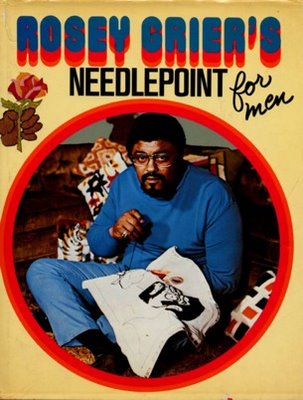 "Grier was serving as a bodyguard for his friend Robert Kennedy when Kennedy was assassinated in Los Angeles in 1968. Grier and Olympic gold medalist Rafer Johnson subdued Sirhan Sirhan, with Grier jamming his thumb behind the trigger of the gun to prevent further shots from being fired."

I didn't know this until today but found it fascinating. Christ, will there ever be a time when I'm not interested in everything?
Posted by ZS at 11:03 PM

Now I love Rosey Grier even more. But wait...dumb question...did he play for the Steelers?

Yello, Capt'n, now I totally thought that he played for the Steelers too, and I even went so far as to question my lady when she said no, which is always a mistake because she's always right. He played for the Giants and the Rams.

And most important, he sang 'It's Allright to Cry' on Free to Be You and Me.

Correct-thank you for reminding me of that cameo on "Free to Be You and Me."

Let's just compare that record and film to anything anybody in the Whitehouse has ever done, said, or touched in the last 5 years, and let's have a moment of utter sadness and rage before we then go on to overthrow fascism and restore democracy.

It's funny. I always think that he played for the Steelers too. However, he DID play for Penn State. So, there is a western PA connection. And how did we get this far into the comments without anybody mentioning "The Thing With Two Heads?" Not as good as needlepoint, but getting there.