So the show is ALMOST done with the exception of a little tiny bit of detail work tomorrow.

This is the big image and that's what the whole project is about. 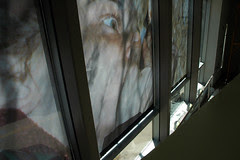 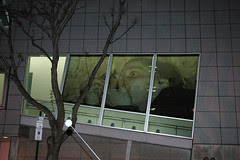 I knew that I wanted to put this image up from the moment I began thinking about the ramp. I was certain I wanted to use the windows as an integral part of the project.

I wanted an image that is looked through figuratively and I wanted to put up an image that could be looked at as well as through and, in addition, change visibility throughout the day, both inside and outside.

And I wanted that moment filled with intensity, desperation and desire. I most certainly wanted folks to see our strong drive to forget and feel good and put some thought into what can bring us to that moment in the photo. And I wanted this image to be a direct, unsentimental and unwavering portrait of a person who is so often unseen, but who is living a life that's not uncommon here in Philadelphia.

This posed a number of problems. I went back and forth about the ethics involved in putting a up a giant photo of a woman smoking crack. After I found her and make sure it was copacetic with her I was able to focus on the other shit.

And then there was the choice of material that the image was printed onto. It was a difficult decision because a number of the options had strong features but lacked inside visibility, lacked the transparency needed or was a zillion dollars over budget.

The transparency issue meant that the low east facing wall couldn't have anything on it.

Over all, I'm very happy with how it's turned out.

There needed to be a slide projection at the turn as well as photos along the 2nd floor to landing wall with images. Those photos are laminated and mounted on pine boards and will be replaced with other images when I take the ones right off the walls at the ICA and nail them into telephone poles in South Philly. I'll keep the configuration but put up new images during the course of the show.

I will go into more detail about this later, but I was working and working on ordering the photos and having an unbelievably hard time. I finally figured out that all of the portraits, excepting striding figures, had to be a direct gaze, looking right at the viewer through the large image. Most excellent job, Dagger, and I'm proud of you. I only wish I could be there for your shows.
xoxo

missing this show is one of the saddest things in my life. i am so proud of you. you amaze me more than all others.