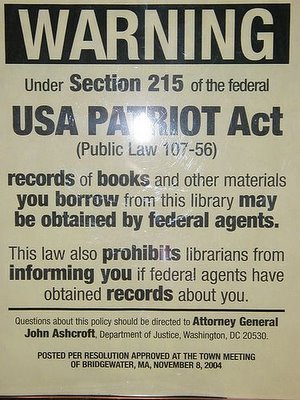 WASHINGTON (Reuters) - A group of U.S. senators, demanding increased protection of civil liberties, defied President George W. Bush on Friday by blocking renewal of the USA Patriot Act, a centerpiece of his war on terrorism.

As I have mentioned about 9000 times, I am searching for a studio and I put a bid in on a house at 9th and Snyder today. It's a little farther than I wanted, but it's on a good, solid block, neighbors were friendly and the actual house is perfect. Read, "not a shell." And also, Francis Albert Sinatra montage on a mirror would be included in the house sale and that's not a mistake.


Anyway, in signing the paperwork to put the bid in, I had to sign a new form that is a direct result of the patriot act. It is essentially a form that records my social security number for easy tracking. Fuck you.

Bush Authorized Domestic Spying.
- from the Washington Post.
Posted by ZS at 11:17 PM