Let me put this out.
I've got a lot going on with the editing process.

Here's how it works-

2. I go through the photos and decide which ones are strong enough to print as 4x6 images or to show online as the first draft of editing.

When I was all 35mm, it was just print them. Now with this digital and all, it's possible for me to color correct and crop the images, which adds a significant amount of time pre printing.

The photo below is appropriate to show as one of the images I made in the South, but it's extremely unlikely that I will include it in the slide shows, in fact I didn't include it in the "New Gulf Coast Blues" slide show this year. It's even less likely that I will include it in 95. It's a fair representation of that moment and helps to put the other photos into a larger context, but as an image unto itself, it doesn't hold it's own to me. At this point, I haven't printed it and don't think I ever will.

Often I will put photos like this one up on my blog or on the flickr site, photos that I've taken that I don't consider to be a part of my work. They're photos not intended for art. 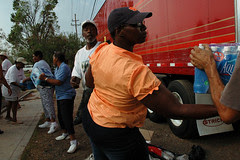 Sometimes I will post a series of photos with slight cropping and color differences. I am just beginning to think about those images in my editing process.

3. Then I work on where the photos fit into the larger projects. I slate some of the images for I-95 consideration, some for slide show consideration and most as reference.

I originally had this in the "New Gulf" slide show this year. It's a fair image and has a few layers of meaning but I eventually took it out of the slide show because I couldn't fit it in the right place. I printed this image and made color copies of it, but it's a long, long, longshot to make it into the 95 installation this year. 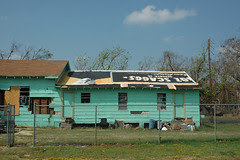 4. The photos are then color copied so I can get a sense of how they formally fit with the other photos in the larger projects. The slideshows have evolved into something more than their original intent, which was a tool to help me see the ordering of photos for 95 in a different format. At this point, I see some images fitting into the slide shows and not 95. A part of choosing the digital slide show format was to really see the images in succession, which has really helped me to see a little further than if I worked in the same gridded format for setting up the 95 show.

5. At this point, serious editing begins. I decide what goes into the 95 show or the slide show. This process takes months and is intuitive, intellectual and obsessive/compulsive. Thematically and formally, each image has to fit.

6. The complete yearly 95 project and the slideshows are the last drafts in the continuing editing process. The final editing of the photos will be done at the last 95 show, which is 5 years from now. Each year photos get kicked out and new ones come in. Sometimes I'll sit on a photo for 2 or 3 years and decide that it has a place in the larger installation but generally I can go up until a month before the show to put the last of the year's photos in.

All of these steps are happening simultaneously. I make new work throughout the year and start this process with all of the photos I shoot, so I am always at all of these places in the continuum of my work.

It's important to me to allow folks to see the full editing process as integral part of my larger project. I am completely confident in my work and not afraid to show images that I will later reject.
Posted by ZS at 10:58 PM

thanks for sharing that Zoe.. Its really great to be able to understand the process that one takes to choosing and ultimately sharing great photos