I saw this truck from while driving on a highway with my lady, my sister-in-law, and 3 of my nieces while headed to my other sister-in-law's house. My vision is fairly good, knock wood, and I can see a possible photo composition pretty quickly, but seeing this truck was a paranormal moment.

All 3 girls were talking to me from the back seat and I was in the front passenger seat. We were driving at least 50 miles an hour when time s-l-o-w-e-d for a moment and I saw the truck...it was on the other side of the highway and far, far back off the road. In that instant, it was as if time had completely stopped. I could read the text and see entire truck and railroad tracks behind it. I saw past the 2 lanes of highway traffic going in the opposite direction and the abandoned shed and building and piles of dirt and mulch and tunnel visioned right to the truck. I then snapped out of my time halt and went back to regular. On the way home from my sister-in-law's, I wrote down some road marks so I could find the truck again. I drove back about a month later, hoping it would be there.

It was about an hour and a half drive to get from Philadelphia to the truck and thank god it was still there. After getting out to make some photos, I saw it was practically impossible to see the text from the side of the highway I originally saw it from. I don't know what the fuck. 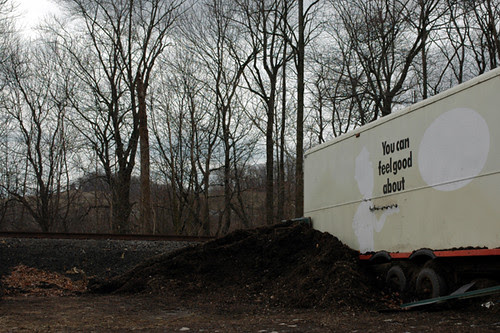 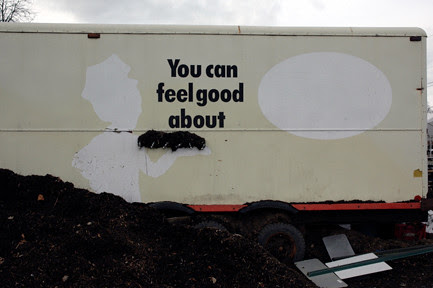 I do know that I am unable to do the most basic housekeeping chores, despite my strong desire to be an at least ok housekeeper, because I don't see piles of stuff in our house or where I've put things down. Now, we don't live in a mansion. We live in a 2 story South Philly rowhome.
I call my cellphone from my house phone about 5 times a day because I've misplaced it, but it's almost always sitting right in front of me.

I lived in a mansion once, Lions Mansion to be exact. Now, I live in Kitayama Heights. You need a name for your spot, sis. Living large or at least making others think so is essential to a healthy lifestyle.

As you know, grasshopper, our car has a name, "How Hot Is This?," but our home does not. I am thankful that you brought this to our attention because although we began to chose a name when we first moved in, we never picked one!

but, really, no name can top Lions Mansion.

Love from "Baker's Dozen Villa" or "How Hot Is This? Homestead"
Big Sis