Sibling Spotlight- Part II: "He Who Does Not Want to Be Named", W-lker R-berts

Second in a series focusing on the greatness of my siblings.

He who never wants his name spoken and had to move to Japan to keep people from talking to or about him...
W-lker R-berts. 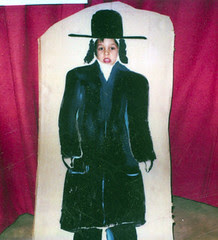 As you can see from this photo, W-lker was very religious as a child.


W-lker, like my other siblings, is actually a genius. Because he is so against anyone talking about him, including his own family, I will respect him by only listing things of importance to him and not discussing his accomplishments. 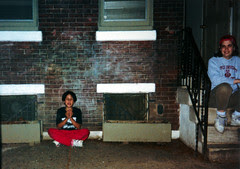 Because my lady and I have been together for 16 years, she has know W-lker since he was 9. This is very fortunate because W-lker enjoys talking Ms. Bloom much more than he enjoys talking to me. This is because Lynn Bloom does not torture W-lker like I do. 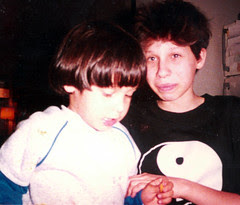 I love my brother very much but I would love him even more if he would just learn how to visit his family more than once every two years.

i can't believe you actually put my photo on the net. and i was going to give you a top ten list, jack-in-the-ass.
bmw

1st. I enjoy how you call it "the net."
2nd. I'm still expecting the top ten
3. I love you but you are still world's biggest jack-in-the-ass
4. You should be grateful that I didn't put up more.