I am fascinated by public relations and propaganda.

Last year Propaganda by Edward Bernays was put back into print. Edward Bernays is generally regarded as the person who created public relations as we know it. Propaganda was written in 1928 and defined modern pr and group manipulation with a book that reads like a how to manual. It's worthwhile noting that Eddie Bernays was Sigmund Freud's nephew and he consulted with Freud on several PR projects.

Here's the book description that I took right from Amazon.

"Bernays' honest and practical manual provides much insight into some of the most powerful and influential institutions of contemporary industrial state capitalist democracies."-Noam Chomsky from the introduction to Propaganda.

"A seminal and controversial figure in the history of political thought and public relations, Edward Bernays (1891-1995), pioneered the scientific technique of shaping and manipulating public opinion, which he famously dubbed "engineering of consent." During World War I, he was an integral part of the U.S. Committee on Public Information (CPI), a powerful propaganda apparatus that was mobilized to package, advertise and sell the war to the American people as one that would "Make the World Safe for Democracy." The CPI would become the blueprint in which marketing strategies for future wars would be based upon.

Bernays applied the techniques he had learned in the CPI and, incorporating some of the ideas of Walter Lipmann, became an outspoken proponent of propaganda as a tool for democratic and corporate manipulation of the population. His 1928 bombshell Propaganda lays out his eerily prescient vision for using propaganda to regiment the collective mind in a variety of areas, including government, politics, art, science and education. To read this book today is to frightfully comprehend what our contemporary institutions of government and business have become in regards to organized manipulation of the masses."
-------------------------
Eddie Bernays concepts were far reaching and are continued to be used today. The ideas he used in marketing war found their way into Nazi Germany propaganda and I think they can be seen distinctly in the films of Leni Riefenstahl.

As an aside, please just look at this most disturbing photo of Leni Riefenstahl and Siegfried and Roy. What the fuck! 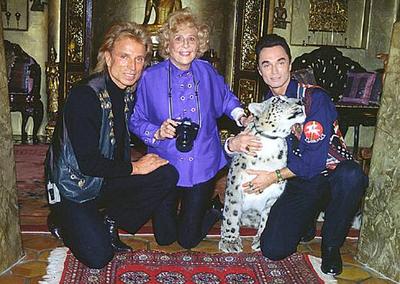 American Apparel is an interesting example of Bernays's marking ideas in action. American Apparel is a clothing manufacturer that has built a image on "sweatshop" free clothing and a relaxed work environment, both in the factory and in their retail stores. While American Apparel clothing is made in the US and the workers are paid more than overseas sewers and many US sewers, the company does not provide paid sick days, holidays or retirement benefits. The National Labor Relations Board, the Union of Needlework, Industrial and Textile Employees accused American Apparel of obstructing efforts by the union to organize the workers. Plus, those recent sexual harassment lawsuits against American Apparel are really something else. It's very interesting how they've marketed the company as progressive and socially conscious as a part of their sales pitch.

What's even more interesting is to see how this happens on a larger scale, such as Edward Bernays hand in helping United Fruit overthrow the socialist party in Guatemala. Through a sick campaign that swayed US public opinion, he helped to insure United Fruit's land grab in Guatemala and crushed the democratically elected government. This method has been used many times since the Banana Republic campaign, notably the brutal Nicaraguan "Contras" who were put forth as "Freedom Fighters" and the first Gulf War that involved a brilliant pr campaign waged by wealthy Kuwaitis who hired Hill and Knowlton to garner US public support.

I highly recommend Propaganda. and the biography of Edward Bernays by Larry Tye.
Posted by ZS at 4:23 PM