I met this woman close to where I work in Gladwyne. She was carrying groceries back to her work along Morris Rd. She carried these groceries on her head for about 4 MILES from the Gladwyne Superfresh to the home where she works. I pulled the car over and asked her if I could take her photo and we talked for a minute about who our "families" are and where they live. I have had the same job for the last 13 years, as a babysitter in the suburbs, about 2 miles from the house where this woman works. This woman and I are both "domestics." 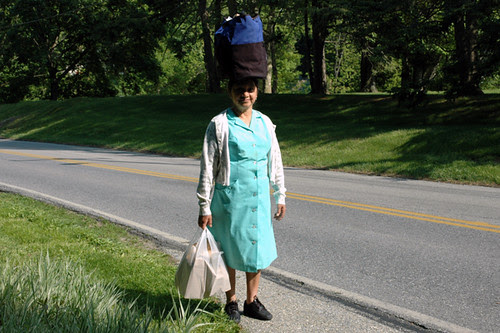 I have had many, many jobs. But I have never had one that pays over 11 dollars an hour, which is what my current job as a babysitter pays me.

I have worked as a babysitter in the suburbs for the last 13 years. I have also worked as a housecleaner and as a stripper. I have worked at a bookstore and a record store and a pharmacy. I have been on welfare.
I have worked at the Taco House on Pine St. and El Taco Grande on Sansom St.
I have housepainted.
I have worked in a factory on Broad St, sewing joker tickets onto coat sleeves.
I have done drug studies where my forearm was cut to see how long I would bleed while taking some smithklinebeecham shit.

Except for babysitting, none of these jobs lasted more than a year and most lasted less than a week.
Posted by ZS at 4:51 PM