There is only one thing I really want to do with this gigantic amount of money coming to me.

I'm hoping I can find one equipped with a coke tray w/ spoon and straw already built in.
Posted by ZS at 4:04 PM 0 comments

I can't sleep and I can't read. I just have to keep playing freecell on my #1 lady's computer.
Posted by ZS at 12:52 AM 0 comments

I won one of the Pew Fellowships.

Check out this quote...

"Anyone who wants to know the human psyche will learn next to nothing from experimental psychology. He would be better advised to abandon exact science, put away his scholar's gown, bid farewell to his study, and wander with human heart throughout the world. There in the horrors of prisons, lunatic asylums and hospitals, in drab suburban pubs, in brothels and gambling-hells, in the salons of the elegant, the Stock Exchanges, socialist meetings, churches, revivalist gatherings and ecstatic sects, through love and hate, through the experience of passion in every form in his own body, he would reap richer stores of knowledge than text-books a foot thick could give him, and he will know how to doctor the sick with a real knowledge of the human soul." -- Carl Jung

I'm reading the collected works of Jung right now and just read Jung: A Feminist Revision. It bit a high hard one even though I can't get enough of Jungian Theory.

I met this woman close to where I work in Gladwyne. She was carrying groceries back to her work along Morris Rd. She carried these groceries on her head for about 4 MILES from the Gladwyne Superfresh to the home where she works. I pulled the car over and asked her if I could take her photo and we talked for a minute about who our "families" are and where they live. I have had the same job for the last 13 years, as a babysitter in the suburbs, about 2 miles from the house where this woman works. This woman and I are both "domestics."

I have had many, many jobs. But I have never had one that pays over 11 dollars an hour, which is what my current job as a babysitter pays me.

I have worked as a babysitter in the suburbs for the last 13 years. I have also worked as a housecleaner and as a stripper. I have worked at a bookstore and a record store and a pharmacy. I have been on welfare.
I have worked at the Taco House on Pine St. and El Taco Grande on Sansom St.
I have housepainted.
I have worked in a factory on Broad St, sewing joker tickets onto coat sleeves.
I have done drug studies where my forearm was cut to see how long I would bleed while taking some smithklinebeecham shit.

Except for babysitting, none of these jobs lasted more than a year and most lasted less than a week.
Posted by ZS at 4:51 PM 0 comments

The use of the phrase "to gaslight someone" seems to have fallen into disuse, as many folks my age aren't familiar with the meaning of "gaslighting."


Here's a solid definition of "gaslight" as a verb.

"To "gaslight" someone is more than simply to create mischief. It means to manipulate a victim into questioning his or her own sanity and, if all goes well, to thereby actually drive the person insane. The term refers to the great 1944 suspense film "Gaslight" in which a greedy Victorian husband (Charles Boyer) conspires to convince his innocent wife (Ingrid Bergman) that she is going mad, the object being to make his planned murder of her (for her inheritance) appear to be suicide. Mysterious footsteps, "misplaced" objects, and inexplicably dimming gaslights (thus the title) are all part of his nefarious plan.

As a slang term for subtly trying to drive someone crazy, "gas lighting" was first noticed by lexicographers around 1956, though the term probably actually appeared as soon as the film (which was enormously popular) did." 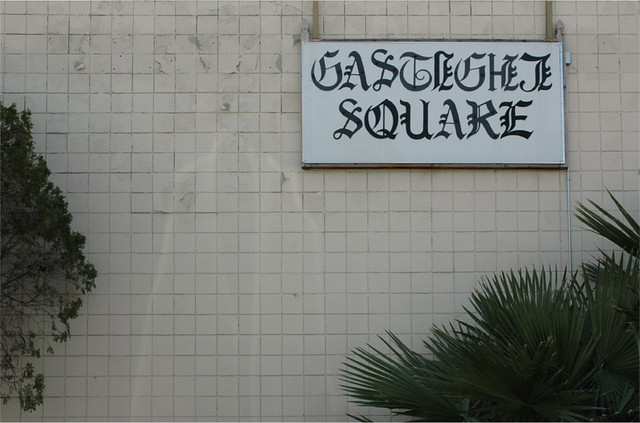 So how happy do you think I was to find Gaslight Square? This photo almost didn't make it in to this year's show because the reproduction made the subtle arch reflection on the left hard to read and the spiky foliage on the lower right hand side became a solid shape, not separate leaves.
However, Gaslight Square made it in for 5 reasons.

1. the word "Gaslight" and it's meaning
2. the difficulty of reading the uppercase script on the sign, making you work a little to see it
3. the architectural grid that is found in many of the other photos in the show, including "Paula's Union Hall"
4. the use of the word "square" in conjunction with a wall of squares
5. the mirroring of the foliage in "We Will Win"

Really, just the word Gaslight makes it a worthwhile addition and the other details make it a solid enough photo to include without trepidation, but it's really just in place to help the cumulative effect of some of the other stronger photos. Solid enough isn't what I'm feeling, and within 2 years I should have a stronger photo to replace Gaslight Square. By the end of the 10 year run I should have every photo holding it's own. 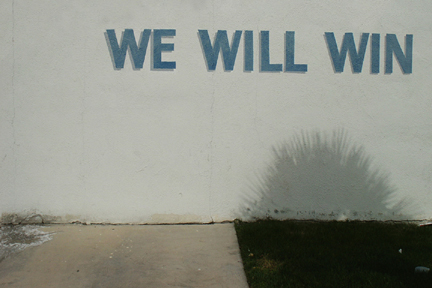 Whatever with that, Angela Lansbury was great, GREAT, in Gaslight. It was her first major roll and she got an Oscar nod at 17 for Gaslight. She also tore up in National Velvet, but, sad to say, I believe her first film was the apex of her career.
Posted by ZS at 9:29 AM 5 comments

Citizen Restaurant was still up with this writing on it.

I could be mistaken, but I think the same person who redid Citizen Rest also wrote this important message about Mike G.
Posted by ZS at 12:36 PM 0 comments

Here's some photos of the show. Thanks to these folks who sent me them.


This was the last photo I put up...thanks for everything Manny.

by Manny Dominguez, Jr aka Unfuckablewith

Thanks to everyone who attended the May 1st show. Please comment and let me know what you thought.
Posted by ZS at 9:33 AM 6 comments

I am just now returning to a semi-coherent state. Thanks for your patience everyone. I was pretty tired by the time the show rolled around.
Posted by ZS at 9:58 AM 0 comments

So Dick Torchia arrived and had a whole camera and tripod set up. I kept trying to get over to him to say hi and thanks but it was impossible until closer to 3 to make my way to his spot. So now I'd like to offer a formal "hello" and "thanks" because by the time I finally saw him I was semi-comatose. Richard Torchia is a brilliant artist and curator. I am huge fan of Dick's work. I'm also just a huge fan of him all around. Dick is an incredibly generous and insightful man who has supported and inspired me over the last few years. Thanks, man.


Then Bernadine Mellis shows up and just gets to work. I haven't seen Bernadine in years, but she just shows up and starts filming. Bernadine is now a professor at Temple and has managed to continue being a genius since the last time I saw her. I'm going to be part of this big project Bernadine is working on based on the Odyssey and I'm very excited about it. I'm also so happy that she's back in Philadelphia. My lady actually said, "I forgot Bernadine was a genius."
Posted by ZS at 10:12 AM 0 comments

These people worked incredibly hard during the course of the show

6:50- Ms. Bloom and I arrive at the spot. I had planned to go by myself and have the Mrs. swing by later, but being the greatest person on earth, she came with at that ungodly hour. Ms. Bloom held the photos and checked to make sure the order was right while I chalked the numbers at the base of each side and then adhered the photos to the pillars. It was raining for most of the morning, which made it difficult to put up every photo as some of the surfaces were soaking wet. The wet sides were skipped so the photos could be put up at the last minute. I had hopes that the cement would dry completely after the rain stopped.

9:30- Ilene Baker aka "Mom" arrives and starts sweeping.
Levi, a man living under 95 right there also helps to sweep.

10:30-Tina Settino arrives and does something great. Goes to the Wawa and gets Sizzlies for everyone- me, LB, my mom and Levi.
Ilene Baker has picked up Nannie Roberts and Nannie gets to work rechalking the numbers that have been washed away by rain.

12- Manny Dominguez goes and picks up photos for sale and the site maps.
Sancha Birns arrives and helps to rechalk the numbers and smooth and check all the photos.
Ilene Baker picks up Liquid Nails as the other glue isn't holding "In God We Trust" up.

12:30-Manny and John have the table set up and everything is under control
LB and ZS run home to change clothes and go.

1- We get back exactly at 1 and there are already a ton of people there.
Posted by ZS at 8:02 PM 0 comments

the night before may day and all through the house

Manny Dominguez, Jr.- Manny is really the only one who fully knows the filing system of the photos. Without his help I would be completely lost and overwhelmed.

Christine Settino- Stuffed and taped bags as part of 3-person operation. Also hooked us up with sodas

Sancha Birns- Stapled and cut booklets after traveling in the pouring rain and getting soaking wet. Thanks Sancha!